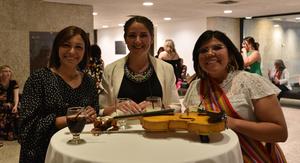 The inaugural Matriarch Summit took place on June 23 and 24 in Winnipeg, MB.

Rosenberger-Deleeuw says she was completely surprised by the personal invitation, but was thrilled to have the opportunity to connect with so many brilliant Indigenous women, girls, two-spirited and gender diverse trailblazers. “One takeaway I am carrying with me from the event is the reminder to uplift and encourage one another. Nahanni’s determination and strength is inspirational, and I hope to keep a little of that in my heart going forward.”

She says spending time in Treaty One Territory opened her eyes to new possibilities for things she hopes to incorporate into her community involvement and work as a PWPSD Indigenous Education Services Provider.